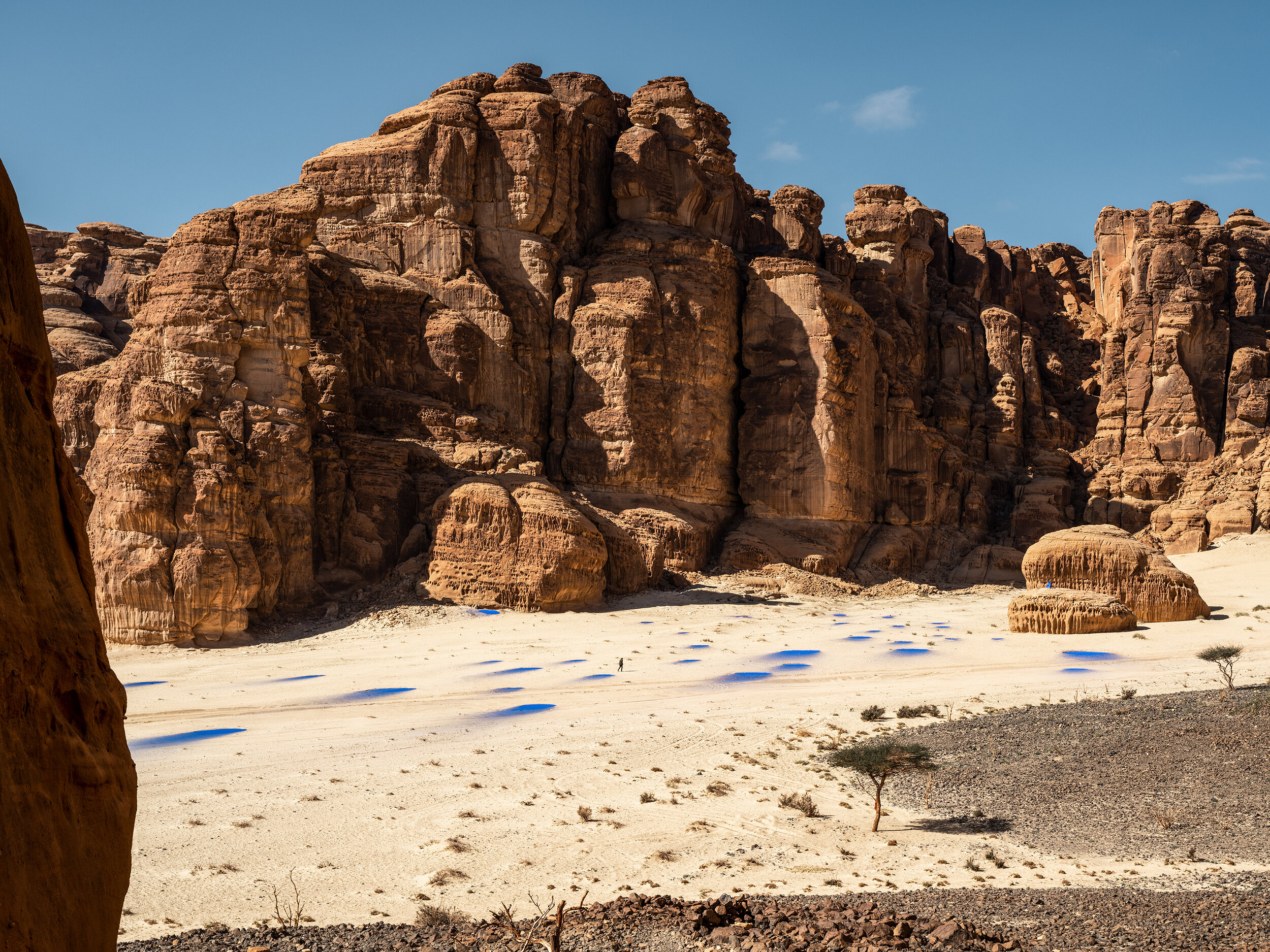 This Desert X AlUla podcast series gives voice to artists from Saudi Arabia, the neighboring region, Europe and the U.S. It accompanies Desert X AlUla, a site-responsive exhibition that took place January 31–March 7, 2020 in the desert of AlUla, an ancient oasis in Saudi Arabia. Desert X AlUla co-curators Neville Wakefield, Raneem Farsi and Aya Alireza talk with some of the participating artists about how they responded to the mighty landscape and why they welcomed the opportunity to participate. Their large-scale site-specific art works have inspired new dialogue about the desert and themes that range from the passage of goods and ideas along the ancient incense route, the cultural memory that passage has left, and the natural resources that have shaped the region, both past and present.

Serving as a crossroads between three continents and a gateway between East and West, AlUla was built from successive civilizations and for millennia was a place for cultural exchange. As AlUla’s first major contemporary art exhibition, Desert X AlUla marks an exciting and transformative moment for Saudi Arabia, reviving this cultural legacy and adding new layers to the destination’s future as an open living museum that inspires creativity.

Neville Wakefield, Artistic Director of Desert X, and co-curators Raneem Farsi and Aya Alireza discuss Desert X AlUla, and what it means both artistically and culturally to bring the site-specific art exhibition to the extraordinary, historic site that was once home to the Nabataeans. For Saudis Farsi and Alireza, the exhibition arrives at a moment of change in their country, for women, for young people and for artists. “It’s a first in Saudi Arabia. It’s the first time to have a site-responsive exhibition,” says Alireza with delight.

Neville Wakefield leads listeners into the canyon surrounded by petroglyphs that mark the site for Desert X AlUla. He and Raneem Farsi stop off at On Parade by Nadim Karam, and learn that his parade of 30 sculptures is about “the power of nature.” Mohammed Ahmed Ibrahim mixes rocks from his hometown of Khor Fakkan, UAE, with those of AlUla to make his colorful Falling Stones Garden. Gisela Colon says her iridescent, 25 feet-high, carbon fiber totem is at once masculine and feminine, futuristic and primal. “I’m trying to make something that is softer and different from the traditional masculine land art,” she says.

Neville Wakefield and Aya Alireza talk with Lita Albuquerque, the California based artist who brought her fictive character NAJMA (Arabic for “star”), to AlUla, a birthplace of astronomy. The blue, veiled lady, subtitled She Placed 1000 Suns on the Transparent Overlays of Space, sits atop a petroglyph, surveying the valley and blue pools placed to correspond with the stars above. After all, NAJMA is “a 21st century female astronaut” with “a mission to reteach the inhabitants of the earth about their relationship to the stars.” Albuquerque also explains why she could not miss being in Saudi Arabia at this time.

Neville Wakefield and Aya Alireza introduce two Saudi artists. By chance, both have created artworks that form snaking lines in the sand. Muhannad Shono created The Lost Path out of 65,000 polyethylene pipes. While the piece hints at the oil industry, Muhannad says it is “about you ending up finding yourself alone with yourself.” Zahra AlGhamdi has created a river of 6,000 silvery, reflective, date tins that she hopes evokes AlUla’s traditional harvest while offering “a universal language” and sense of “togetherness.” Shono also speaks to the thrilling opening up for artists in Saudi Arabia.

Neville Wakefield introduces two artists from outside of Saudi Arabia who chose in different ways to send messages, one about collective action, the other of romantic love. Bjørn-Stjerne Christiansen of the Danish collective Superflex explains why they brought their three-person swing set, One Two Three Swing! to AlUla, “together we can challenge any power structure,” he says, adding that participatory artwork is unusual in Saudi Arabia. Dubai-based, French-Tunisian artist El Seed created a dome of letters taken from a 7th century poem. “A love story is beyond what I could do as a political act”, he says.

Episode 6. Artist Sherin Guirguis makes a crown from an anklet

Neville Wakefield and Aya Alireza talk with Sherin Guirguis, an LA-based artist who taps into her Egyptian heritage in her artwork Kholkhal Aliaa. The large, gold crown, hovering over a shady space between rocks, was inspired by a Bedouin anklet from the artist’s mother. The project was about reconnection with her Arab roots, and with the mothers, daughters and sisters of the region for whom the anklets “are both about beauty and about power.” Guirguis worked with local craftswomen on the artwork– a collaboration that she says was “a life-changing experience for me.”

On this podcast Neville Wakefield talks to the artist Manal AlDowayan about her artwork Now You See Me, Now You Don’t. Its inspiration comes from the puddles that form and quickly disappear in the AlUla desert. Its form is made up of several black circles of different sizes, which on closer inspection reveal themselves to be trampolines. The piece is a serious commentary on visibility, water scarcity and the declining aquifer delivered with an interactive experience that is sheer fun. During the installation, “every morning I would find all the workers on the site jumping on the trampolines,” recalls AlDowayan. “The curators used to come for therapy session jumping. And so I welcome everybody and try to keep everybody healthy and happy.”

Episode 8. Curators and artists reflect on the impact of Desert X AlUla

On the final episode of the Desert X AlUla podcast, curators and artists look back at Desert X AlUla, and reflect on the art and the politics of the collaboration. This first exhibition of site-specific contemporary art in Saudi Arabia brought artists from the Arab world and the West together at a moment of great change in Saudi Arabia. But the collaboration also provoked controversy in the West. Neville Wakefield and Raneem Farsi talk about their shared desire to stimulate cross-cultural engagement and how the artworks achieved this. Artists Lita Albuquerque, Manal AlDowayan and Sherin Guirguis and explain why they felt they had to participate. “I think what we’re doing here is about art,” says Albuquerque, “and it’s not about retreating, but it’s about making a statement to actually open up conversation, open up the doors. That goes beyond politics.”