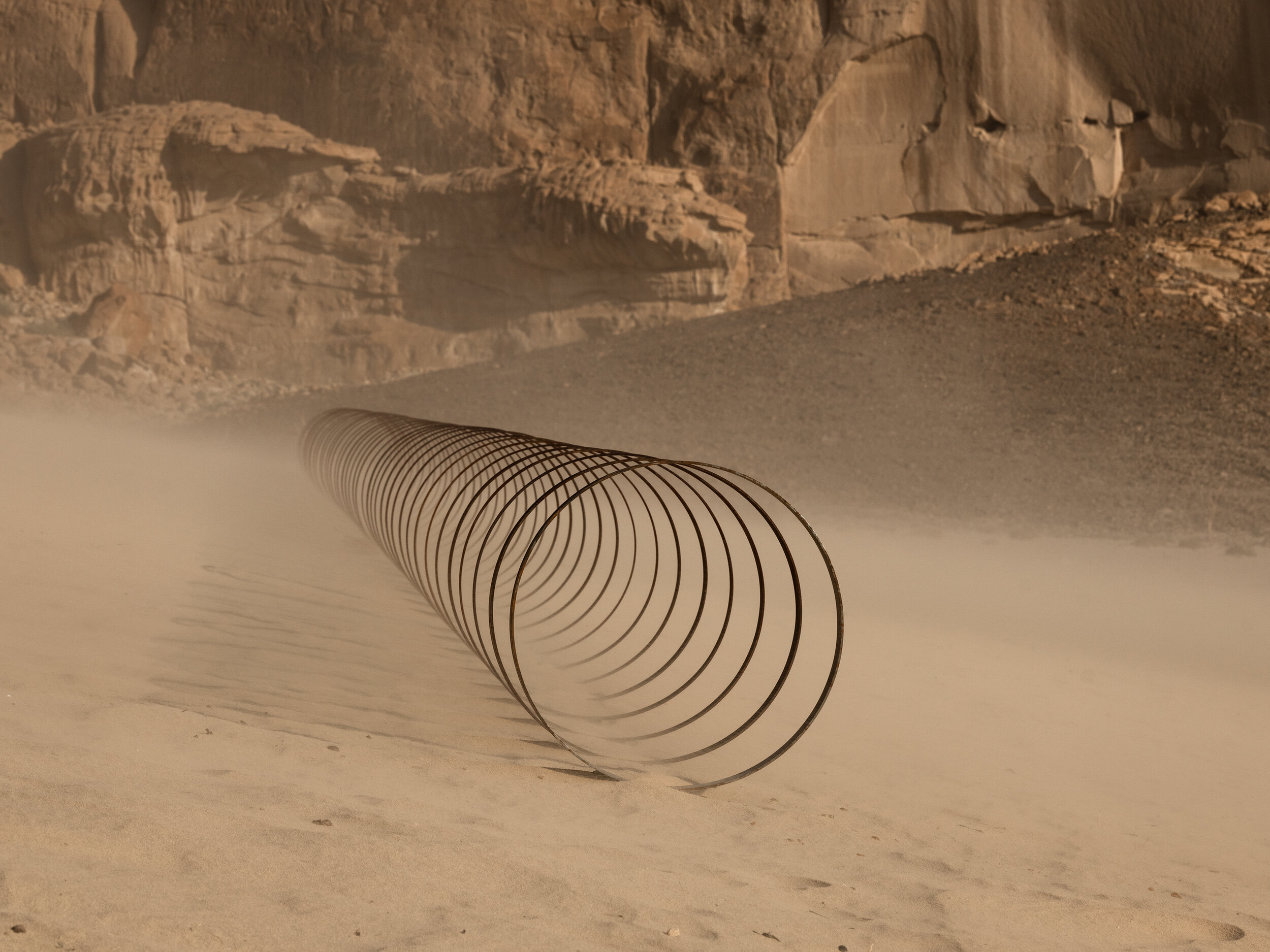 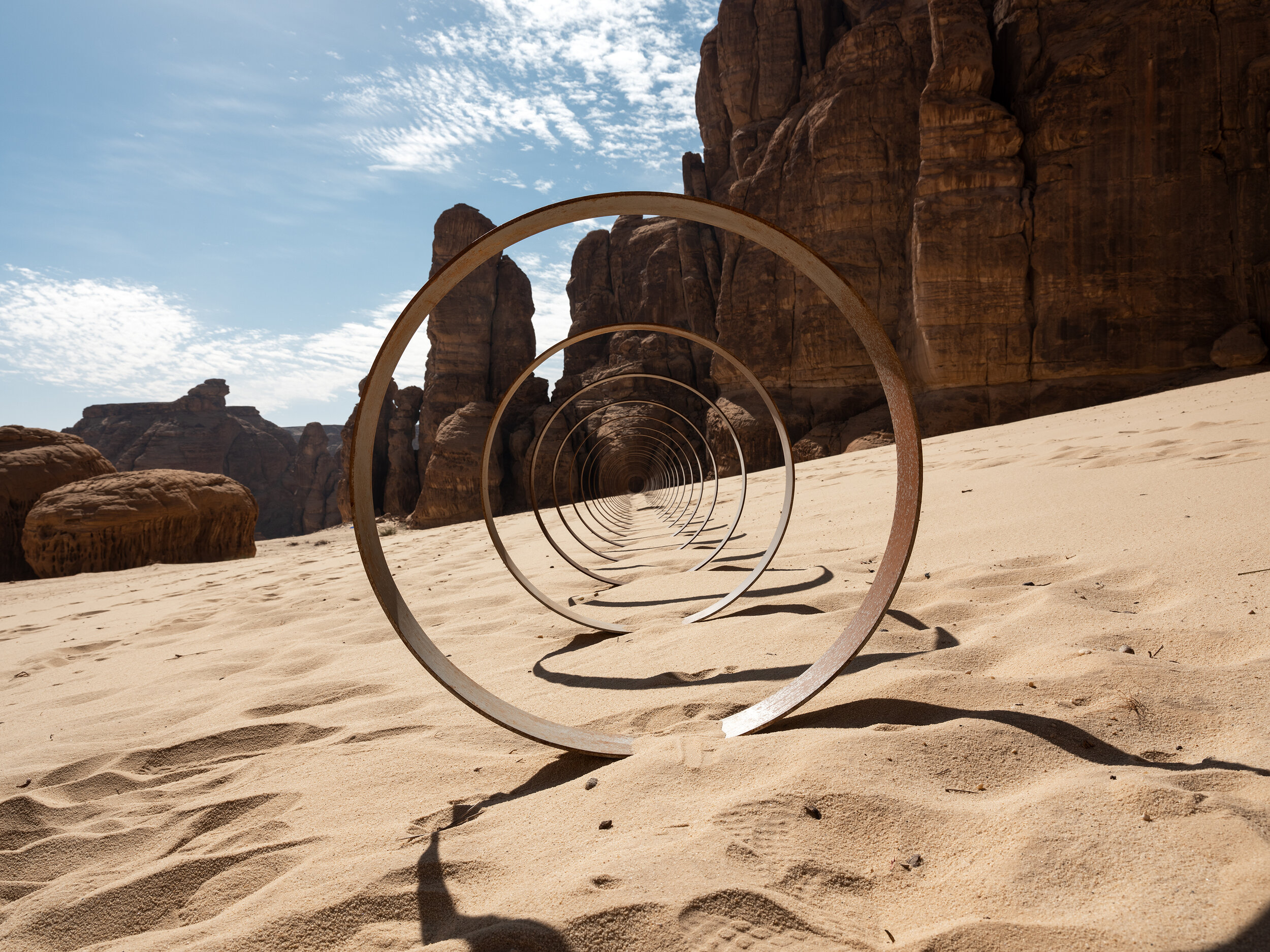 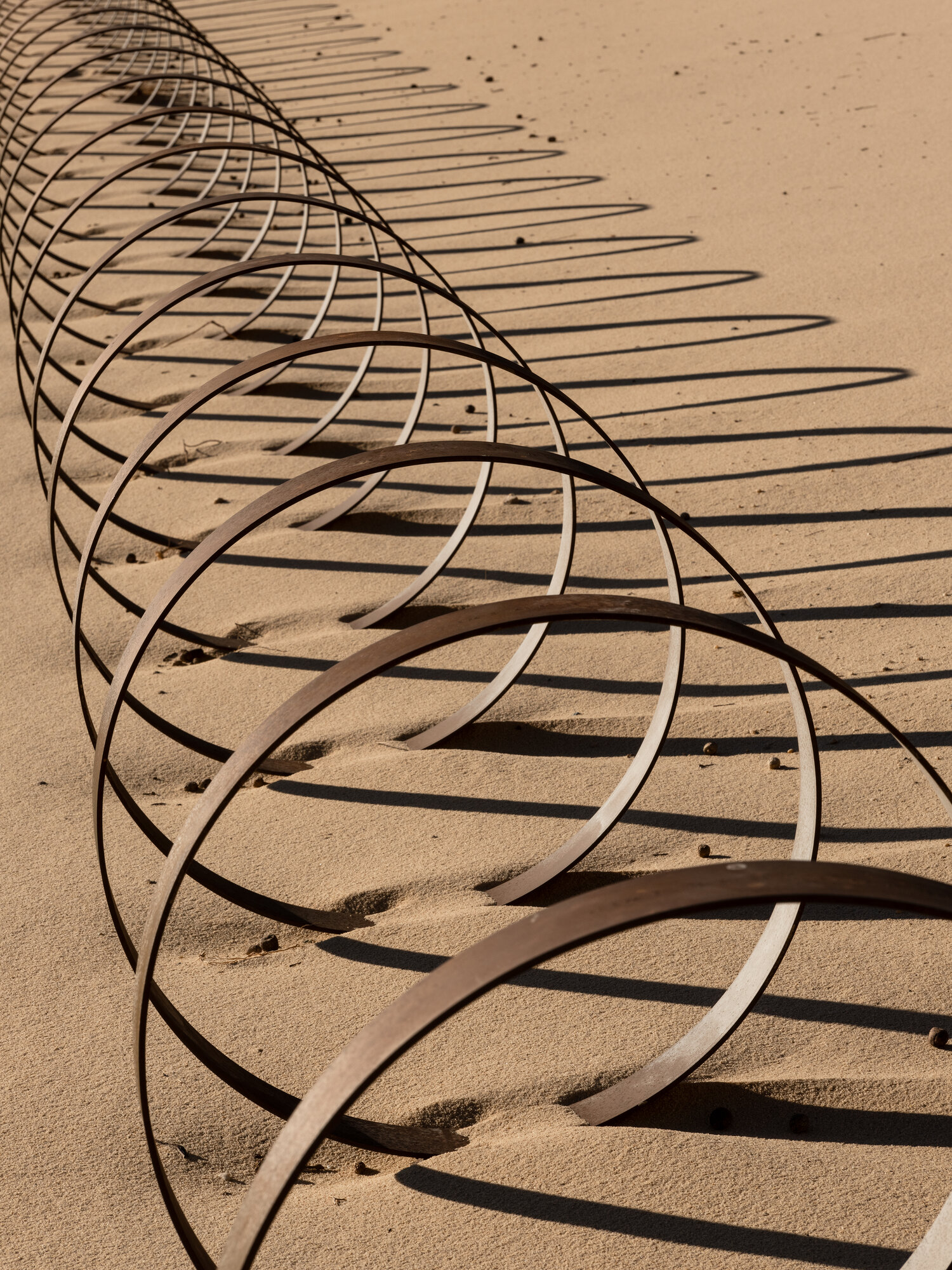 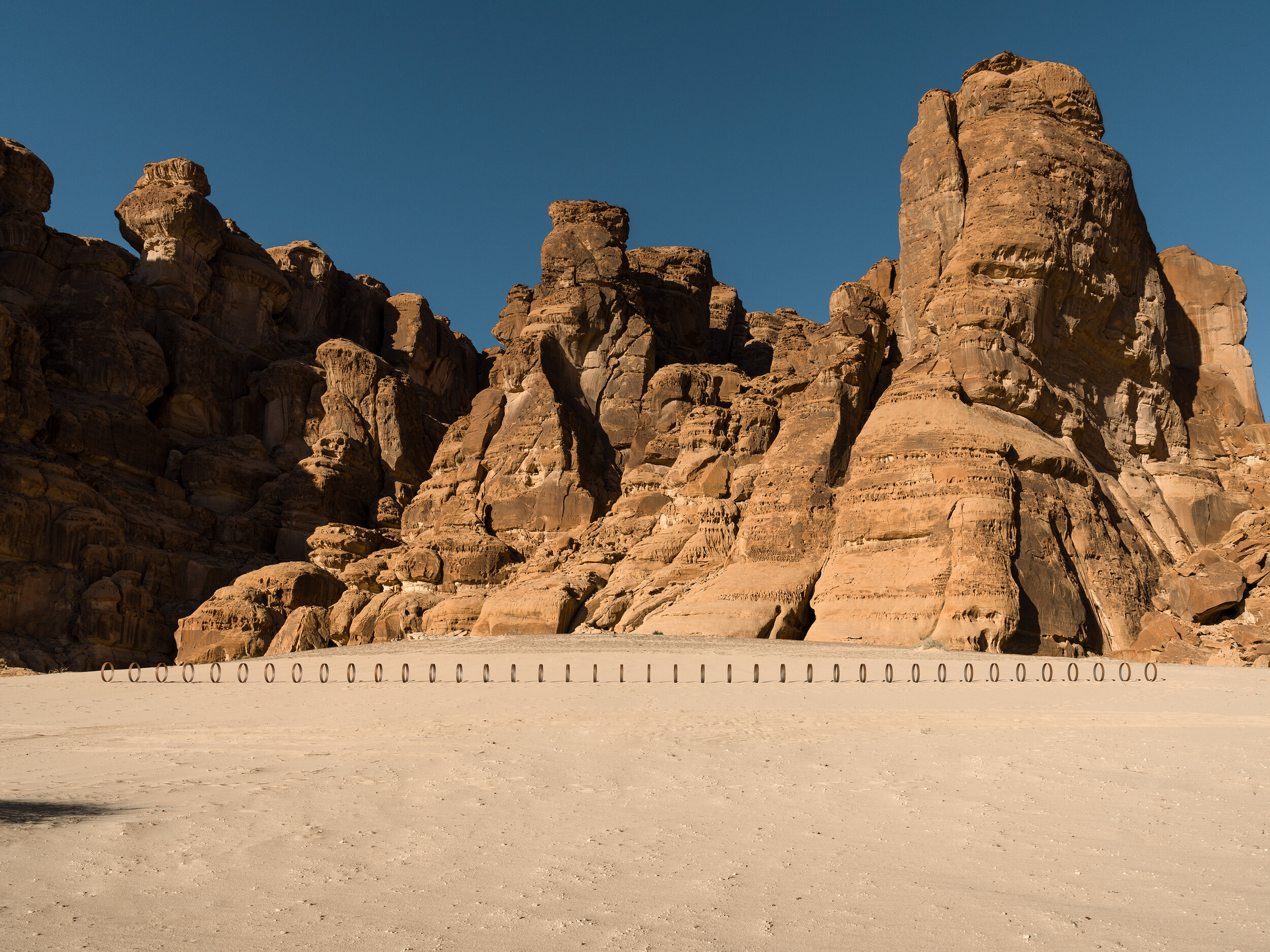 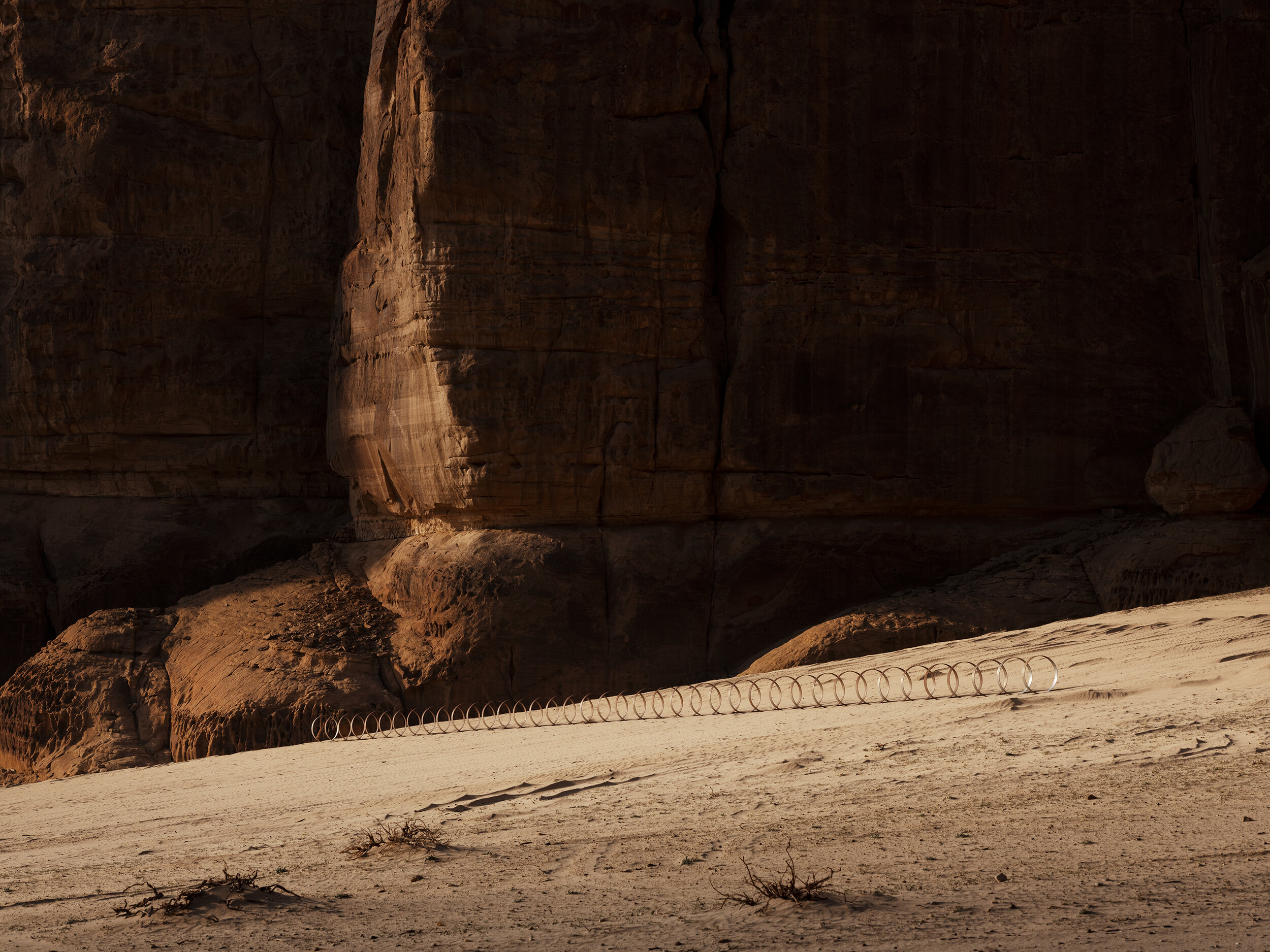 Steel Rings
from the series The Shortest Distance Between Two Points

The Trans-Arabian Pipeline is, as of today, the only physical object that crosses the borders of five countries. That it does so in a time that regions are very conscious of its demarcated lines, with a chequered history of change, makes this curious status even more significant. Steel Rings is a sculpture that replicates this object in ten-centimeter sections manufactured to the same diameter and thickness of the original pipeline, each engraved with the distance from the pipe’s source and its corresponding geographic coordinates.

The forty rings exhibited in AlUla represent the last 40 km of pipeline that run through Saudi Arabia. They are a ruin and a relic, charged with the history of the pipeline project. They constitute an aesthetic and conceptual investigation of how relics come to possess meaning, a process shaped by the forces of history and culture. Despite the fact they no longer operate with the function of their intent, they are imbued with the significance of their history. This mute status, filled with meaning yet without purpose, connects them to the ruins of the Nabatean civilization. Both relics hold great power whose composition happens through geography (where they exists inform meaning) and cultural association (how past civilizations and societies considered the objects informs their present status). Displaced into this new context, the artefact is stripped of its purpose yet the vast social histories that radiate from the original – the borders drawn and redrawn and the sense of discovery and trade are implicitly present. What remains is the imprint, indicating something that was once the most important industry in the region to be transformed into a main symbol of cultural appreciation.

This deconstructed skeletal form, set within the timeless landscape of AlUla, is a reminder of the complexities of human-made history. The pipeline, like the impressive structures of this landscape, is a feat of human endeavor spurred on by conquest and commerce. It traces powershifts that hint obliquely at the conditions that have reconfigured the Arabian Peninsula. Through a single object, a story that is entangled with the narratives of the place is told. In disuse, the infrastructure becomes invested with a power manifested not through purpose and what it can achieve, but the latent significance of what it stood for. It is a monument to the past, the power lines that radiate into and structure the present, a present that’s shifting its focus towards a diversified creative economy and the soft power of cultural exchange. Relocation to AlUla introduces timescales more massive than the brief story of man and oil, shifting perspectives to offer a new vantage on history.