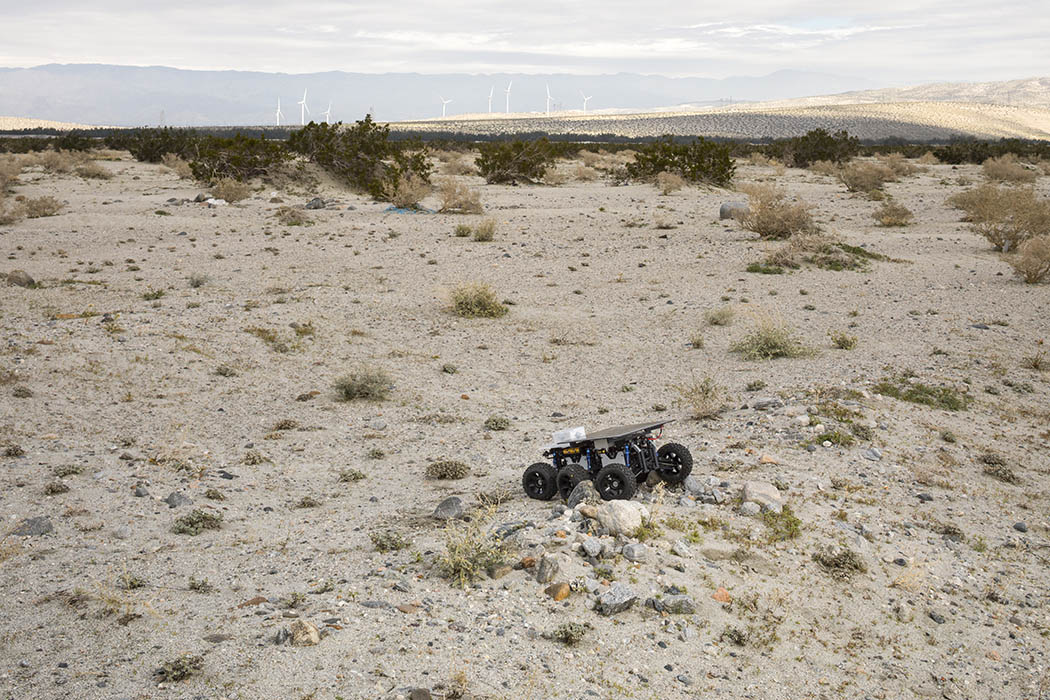 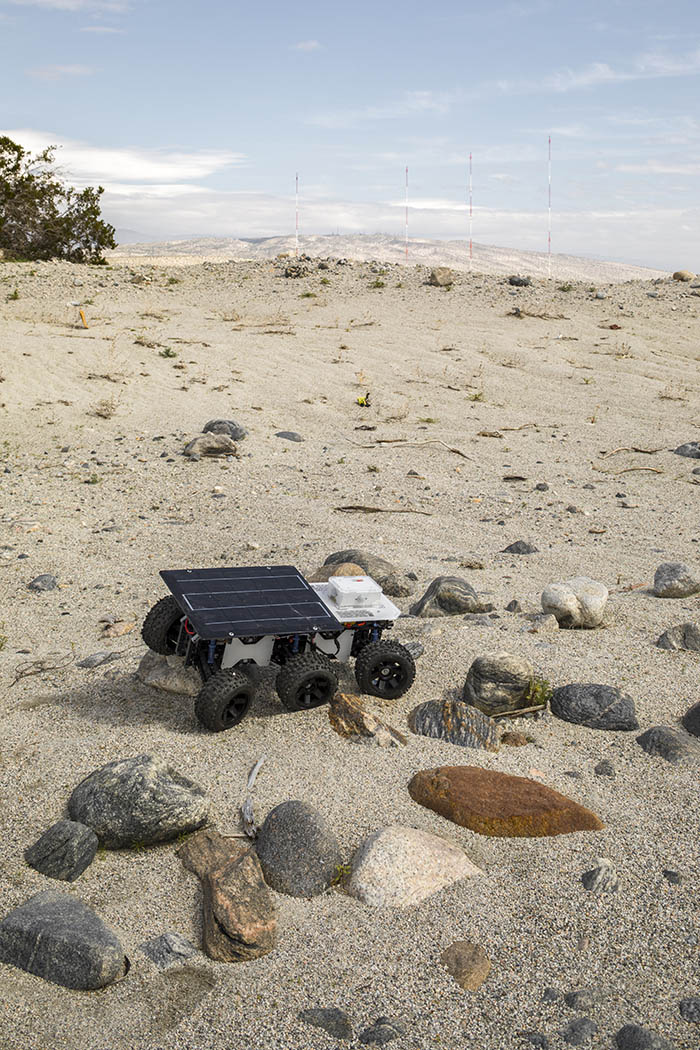 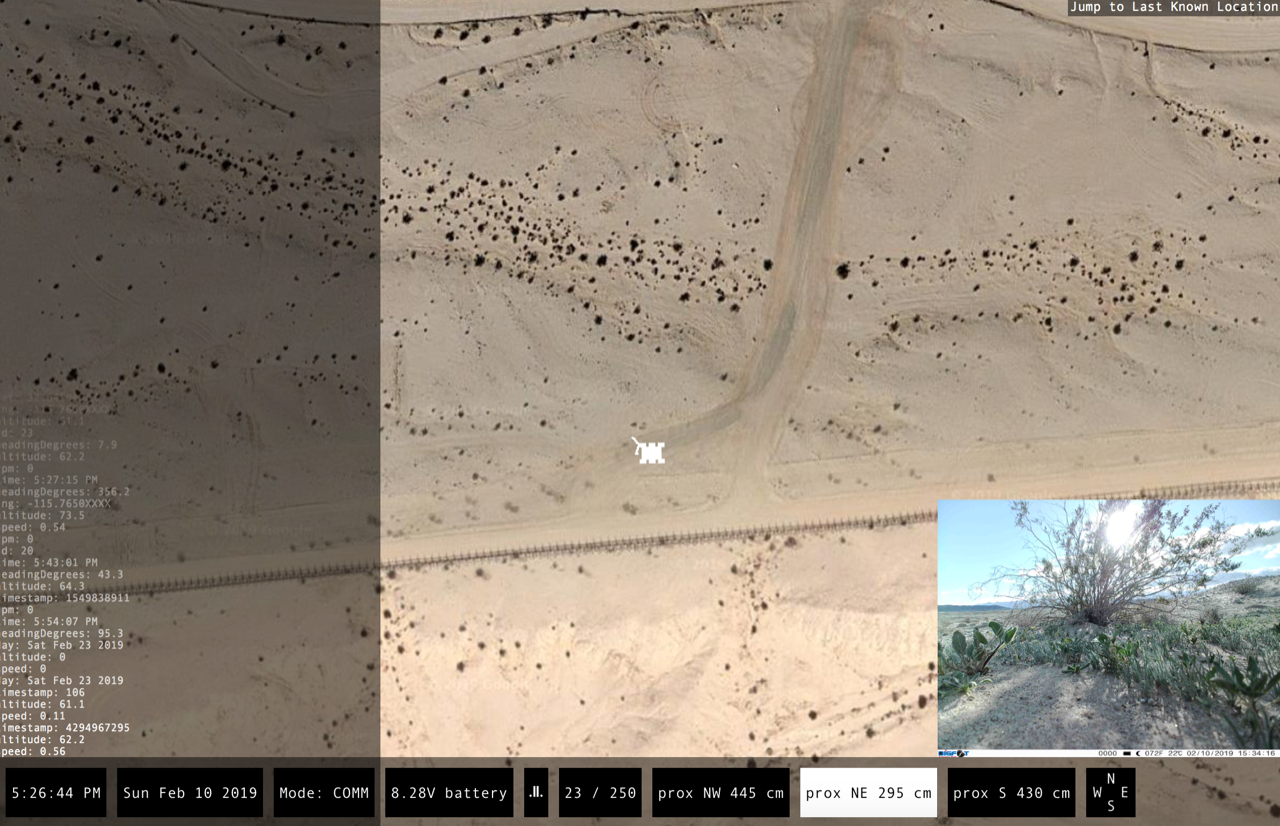 Late July, it was hot and work slowing down. New projects were targeting September when the activity would be resumed at full capacity. Summer is not the season of surprises, usually.

Eighteen months had passed since the desert raids in Coachella Valley. A year and a half since ShyBot lost track, when many feared the worst, that she was kidnapped or otherwise had a bad end. Once again, after the moment of her release in the desert in February 2017, unexpected feelings of tenderness and concern were directed towards this little creature, mechanical yet endowed with peculiar character.

ShyBot is an autonomous rover, equipped with sensors and an electronic brain that pushes it to turn away from anyone or thing that approaches. In the second half of July 2018, DesertX staff were contacted by a desert wanderer. His name is Kyle, he is a young man who does not resist the fascination of large spaces only apparently empty, and he travels them with his off-road car looking for surprises, unlikely encounters. Just that day he found himself facing ShyBot. Thanks to the QRcode stamped on her external surface Kyle discovered that there was a reward provided for information on the fugitive robot that had got lost.

ShyBot had therefore returned to the starting point, but this, although surprising and comforting those who had feared her destruction or dismantling, is not a satisfactory point of arrival. Being hospitalized in a robotics lab is just not acceptable by the shy nature of the small antisocial robot.

However, the second edition of Desert X was coming and the temptation to free her in a place where it is even more difficult to restrain her desire for freedom, independence and loneliness was strong. California is a land of incredible contradictions, and it is perhaps for this reason that for centuries it has been a forge of social and technological change. ShyBot somehow brings together some of these contradictions. The great spaces and the uncontaminated nature that meet the civilization have generated the nucleus of the digital age that has changed the world. The idea of the journey between past and future, that uncertain line of demarcation that John F. Kennedy described to the participants of the Los Angeles Convention on July 14, 1960 as the New Frontier.

Almost 60 years later the theme of the frontier returns with all its strength right here, in the desert of California, crossed by people heading north in search of a possibility, a new life, a shift from an unbearable past and without prospects to a different future, perhaps better, to be opened to their children. The very idea of the United States after all, the American dream.

In the midst of this desert we are trying to redefine the meaning and value of the idea of frontier, in a dramatic tension between the erection of a high steel wall without interruption and the spontaneous, disordered and swarming movement of people all different from each other but seen as a uniform and threatening mass to which to put a dam.

Nothing new. The world changes and evolves through contradictions: a step back and two forward when it’s ok, one forward and two back when it goes wrong.

This is also ShyBot’s way forward: she does not judge, she does not seek a truth, she just wants to be alone. If she encounters an obstacle she avoids it, if someone tries to approach she flees. This is why ShyBot will return to the desert and will do so starting from that line of demarcation between north and south, between simplification and complexity, between conservatism and progress, between wealth and poverty. She will do so by randomly and disorderedly tracing the boundless expanse of parched land, unsuitable for human beings, which the political boundaries claim to divide. She will move across, ignoring them and with the sole purpose of not being annoyed.

Please do not bother, ShyBot is back!